There was a problem rendering your image gallery. Please make sure that the folder you are using in the Simple Image Gallery Pro plugin tags exists and contains valid image files. The plugin could not locate the folder: images/gb31

All the rounds are played and the end ranking could be made. After some calculation it emerged that the winner of the tournament is Jonny (6 out of 7). Shredder is second, only on the tie-breaker but with equal number of points (6 out of 7). Shared third place is for GridProtector and Hiarcs (5 out of 7).

The games can be downloaded from the default download section (32 KB)  or replayed below. The results and the final ranking can be found under PT49 and later also under the history menu. 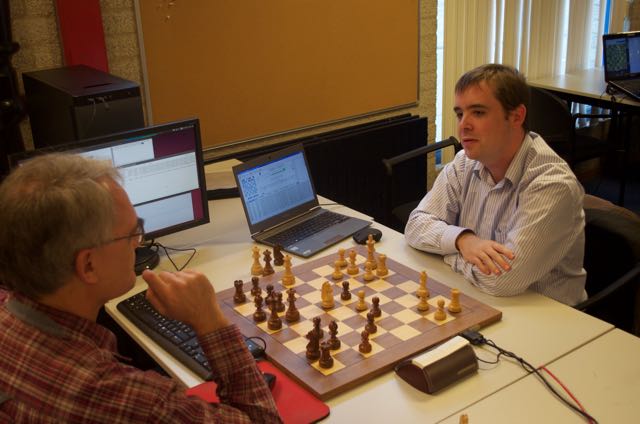 The last round must result in a winner. Both Jonny and Shredder share at the moment the first place with 5 from 6. They are followed by GridProtector and Hiarcs with 4 points.

Due to cleaning out the playing hall the results are somewhat late.

Results and ranking can be found via the PT49 menu. Live games via the same menu, but select live. Photos can be found below. The PGN of the previous round has been uploaded to the downloads.

Round 6 started a little bit later then expected. Board 6 does not work unfortunately, so the game for the first place can not be followed online!

With two rounds to play Shredder is leading with 4.5 out of 5 games. Jonny is only a half point behind on 4 and Hiarcs is on the third position with 3.5. Embla has the tail light, still with 0 points.

Results and ranking can be found via the PT49 menu. Live games via the same menu, but select live. Photos can be found below. The PGN of the previous round has been default uploaded to the downloads (32 KB) .